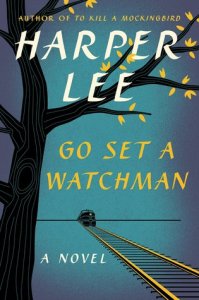 When I heard Harper Lee’s second novel — actually an earlier version of her first, the classic To Kill A Mockingbird — was to be published, I wondered if it was a hoax. It reminded me of a sitcom episode I saw many years ago that involved some scheme regarding the reclusive Catcher in the Rye author J.D. Salinger. I think one of the characters actually posed as Salinger to impress or appease someone else.

A part of me still wonders, but the long-awaited Go Set a Watchman is due out Tuesday with Harry Potter-ish anticipation. Early reviews indicate a dramatically different version of Atticus Finch than the kind, justice-seeking lawyer and father in Mockingbird. And if you’ve seen the movie version with Gregory Peck as Atticus, that character’s gentle goodness is indelibly etched in your mind.

Watchman is set twenty years later, with the adult Jean Louise (Scout) Finch returning home and confronting the same old racist stuff, only now it’s coming from dear old dad as well. Apparently, Watchman was Lee’s original version of Mockingbird, and a publisher convinced her to turn the many flashback sequences into a separate novel, which became Mockingbird. So if the younger Atticus and the older Atticus once lived in the same novel, that would put a very different cast on the conflicts faced by the young narrator and those around her.

What exactly happened to Atticus during the intervening years? We may find out in Watchman. We may not. We’re not likely to hear or read any interviews with the author, who is known for granting none.

And now I’m going to let this be until I read it myself.