“To that which you tame, you owe your life,” Stacey O’Brien was told when she adopted a tiny barn owlet in 1985. The tiny creature had an injured wing and would not have made it in the wild, so O’Brien brought the wild into her home. She tells their story in Wesley the Owl: The Remarkable Love Story of an Owl and His Girl. 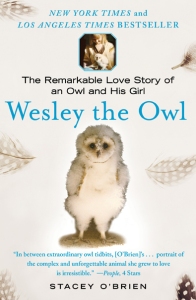 One would think the Caltech biologist knew what she was getting into. She was part of a scientific research community that in many ways was its own subculture, so she had not only knowledge but support. But does any new parent truly know what he or she is getting into? Perhaps the task is not to know, but discover.

To provide Wesley with what he needed, O’Brien had to enter the world of a sophisticated bird of prey with his own set of rules — “The Way of the Owl,” as she would call it. This required her to procure and prepare mice to feed him — all in a day’s work for an owl mom, but not so easy for an adoptive human mom, even a scientist. You recognize it’s the way of nature. But still.

Wesley was as devoted to O’Brien as an owl in the wild would be to his mate, and he held her to the same standards. When she traveled, he pouted upon her return. When gentleman callers turned up, he let them know who ruled the roost. He groomed himself fastidiously; if he plucked a feather on one side of his body, he invariably pulled the corresponding feather on the other side. Wesley even became an unexpected link with O’Brien’s grandmother, a fellow animal lover. O’Brien also learned to use her intuition to care for and communicate with Wesley.

The relationship lasted nearly 20 years — through jobs, boyfriends, and the ups and downs of life. Sometimes she cried into his feathers and he tried to understand. When she had to contend with her own life-threatening illness, the knowledge that Wesley needed her helped keep her going. “I looked into the eyes of the owl, found the way of God there, and decided to live,” she writes.

After Wesley passed from this world, writing about their journey together gave O’Brien a way to cope with her grief, and to offer the rest of us a glimpse of The Way of the Owl.