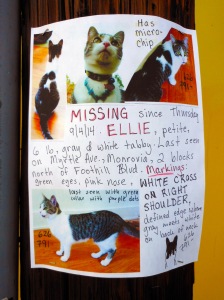 The tiger cat stood on the sidewalk on a sunny Sunday morning, looking around and meowing. When I petted him, he felt very thin. How long had he been out on his own?

I looked up to see a gentleman cutting across the manicured lawns, looking for a cat … but not that one. His was a blue-point ragdoll. I jotted down his number and where he lived, and promised to keep an eye out.

I have two cats, and the older one is barely beginning to tolerate the younger one’s presence. Bringing home a third was not likely to go over well, and yet I felt terrible about just leaving him there. Rock, meet hard place.

Then a woman came by with her dog. She hadn’t seen the ragdoll and didn’t know where the tiger cat belonged. After seeing how friendly he was, she decided she’d take him home and try contacting the shelters in the morning … or maybe keep him. I picked up the cat and helped her get him home. Only then did I realize he’d had a messy accident on me, and I wondered if he was sick.

I went home, cleaned up, and posted the photo I’d taken of the cat on Facebook — my page, our neighborhood association page, and a couple of local lost pet pages. I saw photos of the missing ragdoll cat posted on one of the lost pet pages, so I shared those on my page and the neighborhood page as well.

Over the next couple of days, I sent distant Reiki energy to both cats, those caring for them, those searching for them, and for overall help and healing in each situation. I took my daily walks in the area where the ragdoll cat lived, sending out more energy and hoping to catch a glimpse of the wayfarer. Some animal communicators and other intuitives specialize in locating lost pets. I am not one of them — but I wanted to do what I could.

On Wednesday, I saw a woman outside in that area and asked if she’d seen a ragdoll cat. Her face brightened. That was her cat, and he was home safe and sound. I don’t recall the exact sequence of events she relayed, but a Facebook share someone else saw may have helped bring him home. Score one for social media.

I touched base with the lady who’d taken the tiger cat in. She’d had to take him to the city shelter since the SPCA shelter was full and her dog had gone after him a few times. He was not microchipped.

My heart sank. If no one claimed him, and especially if he was sick, chances were good he’d be euthanized. The lady had done her best, and so had I, but it still felt so overwhelmingly insufficient and sad.

So one happy outcome, one at best unknown. This is one of the hardest aspects of both working with animals and doing energy work. We are forced to come smack up against what we can and cannot control, and we are called upon to keep going and bringing forth the best in ourselves regardless. We get so mired in what we can’t do that we lose sight of what we can do — being vigilant about keeping our cats indoors, watching out for lost pets, contributing to animal welfare efforts, praying for all God’s creatures, being present for them, and more.