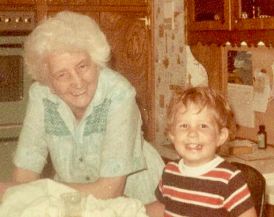 My grandmother, Flossie Egan Craig, and I in 1969.

Fifty-three years ago, my mother watched news coverage of the war zone her hometown had become.

My grandmother, in her 70s, lived alone in the same house there on Cruse Street. Detroit was burning with arson fires, July heat, and years of anger stoked by injustice and fear. Mom was hours away in Indianapolis with a 6-month-old baby (me). I don’t know how long it took before she knew Grandma Flossie and the rest of our family and friends were safe in a city that suddenly and frighteningly wasn’t theirs.

Grandma Flossie in front of her home on Cruse Street in Detroit in the mid-1940s.

Over five days, 43 people were killed, 1,189 were injured, and hundreds of buildings were burned.

Only later did Mom learn that while the worst of the action was happening outside her door, Flossie played hymn after hymn on the piano, singing at the top of her lungs.

Her African American next-door neighbors, who were under their beds, could hear it.

Flossie was the only grandparent with whom I shared any earth time, and then only three years. The memories I do have of her, family stories such as the one above, and her abiding faith continue to inspire me.

Civil unrest is perhaps a poor comparison to a global pandemic, but I think my grandmother would handle it in much the same way. In a threatening situation, she offered her all to God, creating a bright sphere of protective energy with her music. That energy expanded with every note to surround her modest brick house and those nearby.

We humans have always known the power of sound and song to heal and unify. Whether it’s a lullaby, a protest song belted through tears, or a national anthem sung in unison, music raises our vibration and creates a powerful energy. Does it kill viruses, stop bullets, alleviate shortages, or put out fires? No. But it sure can change the atmosphere that produces and responds to all of these.

I don’t know if “How Can I Keep from Singing?” was one of the hymns my grandmother sang during those trying days. But I think it fits for ours, so I include the Enya version below.

May we, in today’s tumult and strife, hear and join in that “real, though far-off hymn” — with enough strength for the neighbors to hear.

2 thoughts on “Grandma’s lesson for our time”