During this season of darkness and renewed light, heartfelt thanks go to my clients, friends, and the animals we love.

With Gratitude: 2018 from Nancy Crowe on Vimeo.

Geronimo stands with a buddy at Summit Equestrian Center. (Photo by Ann Collins)

When someone returns from military service with wounds seen and unseen, we may not know how to help. Fortunately, horses do.

This might seem counterintuitive, considering how many battles we humans have ridden horses into over the millennia, but humanity’s partnership with the horse continues to evolve. The physical tasks of caring for horses get veterans outdoors, moving, and doing something tangible that makes sense. But it’s more than that.

Horses are nonjudgmental, profoundly empathetic, and delightfully individualistic even though they are also social creatures. A horse may not comprehend the particulars of what a veteran has been through, but you can bet that horse knows how he feels. The horse likely has war stories of his own: of trauma, injury, self-preservation, and survival. When horses allow you into their world, the healing goes both ways.

Jockey Red Pollard said in the movie “Seabiscuit” that he, the trainer, and the owner — three men of very different backgrounds, each with his own demons — didn’t take a broken-down, underdog horse and fix him. “He fixed us … and I guess in a way we kinda fixed each other too.”

The therapeutic riding center where I serve as an animal Reiki practitioner and animal communicator, Summit Equestrian Center in Fort Wayne, Indiana, facilitates just this sort of work with horses and veterans. We’re having a special event called Stock the Barn 6-9 p.m. Friday, Nov. 9, to raise funds to do even more. Let me tell you about a few of our equine warriors.

• Pirate, a big, red retired racehorse with incredibly kind eyes, could have spent his retirement at a stud farm but opted to come to Summit instead. He’s got a host of aches and pains left over from his racing days. When I see him walking across the pasture, I hear him say, with each step, “I’m moving … I’m moving.” This summer, as I dealt with some of my own pains, he would regularly ask: “Are you moving, too?” A horse holds you accountable like no one else does.

• When I first met Geronimo, the young mustang reminded me of James Dean … a wildly handsome rebel without a cause who felt others just didn’t “get” him. His resistance to cooperating with director Allison Wheaton, along with a few scuffles with the other horses, frequently landed him in timeout, but she continued to work with him. The skills Geronimo needed to gain, Allison says, are the same skills some veterans with PTSD need to be able to go to the grocery store. Veterans can see themselves in a mustang’s hypervigilance. Last winter, just by his presence, Geronimo comforted a volunteer through a stressful work transition. Now he’s connecting with our veterans. His journey still has its ups and downs; progress is rarely linear. They “get” him.

Biff, like the veterans he works with, has had to work on learning new ways of responding to the world around him. (Photo by Meg Miller)

• Then there’s Biff. The Gypsy Vanner joined us this summer and proceeded to leave bite marks and bruises on just about everyone before being put in a pen by himself, but within sight of the rest of the herd. Somehow or other, Lakota — another young mustang adopted from the Bureau of Land Management who has been doing some serious training of his own — and Geronimo let themselves into the pen with Biff. The three of them have been hanging out without incident, and all three have been working with veterans. Biff has decided he wants to keep learning.

If a veteran you know is struggling to find a way forward, there’s probably a horse out there who needs a buddy, too. Let’s leave no one behind. 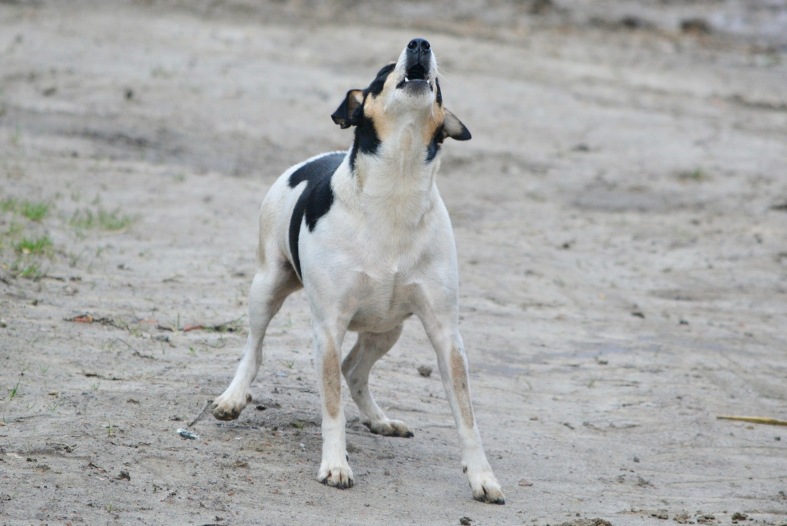 Animal Reiki practitioners and animal communicators often speak of “creating a peaceful space,” “the Reiki space,” and “holding space” for animals. These all generally refer to a meditative, heart-to-heart connection between practitioner and animal that facilitates relaxation, healing, or insight.

Until a dog barks, a truck backs up, or our thoughts wander. Anyone who has ever practiced (or tried) meditation or prayer will know what I mean. How do we get back into that “space” when it dissolves around us … or when we fall ass over teakettle out of it?

When I do my weekly Reiki and animal communication rounds at a nonprofit equestrian center, I say a prayer before leaving home and listen to a lovely sung Psalm 23 on the way. These small rituals get me in the right frame of mind and heart to share Reiki, or, as my teacher Kathleen Prasad says, to be Reiki, and to listen to whatever the animals want to tell me.

One day I arrived at the barn to find two of its younger residents, a goat and a pig, hanging out in the driveway. Again. Directly in the path of construction vehicles and Realtors coming and going, some rather rapidly.

“What have I TOLD you two about being in the driveway?”

Aaaaand, just like that, I was out of the Reiki space (or pre-Reiki space) and into enforcer mode. (Whoever said that sooner or later, we all quote our mothers was absolutely right, by the way.)

That is, until I’d shepherded the wanderers to one side and silently recited the “Just for today” Reiki precepts. Then I moved on to sharing Reiki with and listening to the animals — starting with the only slightly disgruntled goat and pig. That reset took less than a minute.

Interruptions and distractions happen, but they don’t have to throw us off. I’ve found that the meditative or Reiki space is something I can move in and out of as needed. My Animal Reiki III and Teacher Training with Kathleen was held in a sanctuary barn full of anxious animals, including many barking dogs. Through practice, we learned to hold peaceful space by adapting — moving around as needed, responding to interruptions, and more — and refocusing. The animals were noticeably quieter and calmer at the end of our three days at the barn. The entire energy of the place felt lighter.

Whether we are practitioners or pet parents, I’m convinced that our ability to adapt to what is happening in the moment can only help the animals. Anything I have learned about mindfulness advises us not to judge the distractions, our “monkey minds,” or ourselves, but to gently bring our awareness back to the here and now.

It’s not about perfection. It’s about showing up, coming back, and being there — sometimes all in the same breath.