The Seven Questions series continues with my cousin and friend, artist Joel Selmeier — a sculptor who works for peace through the creation of beautiful, original peace poles.

Peace poles were born of a Japanese tradition. In Japan they have a tradition of posts with text on them to commemorate all kinds of things. Just after the Second World War a Japanese man wrote in Japanese, “May peace prevail on earth” on one and had it translated into a different language on each side. Someone saw that and wanted one, etc. Now there are over 200,000 of them around the world and a nonprofit organization organizing the movement for North America.

2. Tell me more about what happened in 1999 when someone saw one of your sculptures and asked you to submit a proposal for a peace pole. It sounds like a transformative moment. 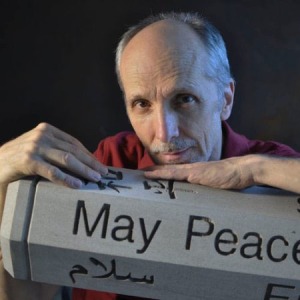 I had wasted a year in a rock band when I was young and during that episode spent time thinking about what better thing I could do for the world with my life. The Vietnam War had just ended and now that I wasn’t going to be dying there, I decided that the best thing I could do with my life is work for the United Nations, our only department of peace. So I went to grad school to study political science, with a specific interest in peace. And I communicated with someone at the UN about how to establish a career there. But after a year and a half of this, it was clear to me that I didn’t belong in a bureaucracy even if it was the UN. And I didn’t belong in politics. I was an artist. The thoughts that woke me up every morning and kept me going through the day were artistic. I had been trying to avoid becoming an artist because artists starve, but I had no choice. So I embraced it and starved for many years, all the while wondering how in the arts to serve the cause of peace.

Twenty-five years later I was working on a sculpture when someone who stopped to talk to me about it said they were looking for sculptors to submit proposals for a larger-than-normal peace pole and asked if I would be interested in submitting one. I had never heard of a peace pole, but looked into it and discovered that they are art and they are peace. They became my life’s work.

3. How is one of your peace poles born?

People wanting to become part of the movement often get excited about getting a peace pole while all of their friends, when they see it, wonder what the excitement was about. They are just posts with text on them. Trying to make peace poles with which people unfamiliar with the movement will want to engage, and that manage to become part of the communities in which they stand, is a huge conundrum in the face of the practical limitations and the strictures imposed by tradition. The tradition is important. It is what creates the language that enables peace poles to speak. They are poles. They are not twisting and bending shapes. How do you make a pole interesting enough for people who have no idea what a peace pole is to engage with it? In the decade and a half that I have worked on this, I have managed to come up with only two that do that. I put prototypes of them in an art gallery and watched people engage with them in ways that I have never seen people engage with any other peace poles. So I’m working on versions of them now that will be suitable for photographing so I can put pictures of them on my site to see if anyone can afford them. That is the biggest problem for these two. They are expensive.

4. How can a peace pole benefit and function in someone’s garden? In a public space?

There are so many monuments to war. There should be some to peace. I mention on my site that there is a high school in Illinois where when there is an altercation, they tell the kids to take it out to the peace pole and stay there till they figure out how to live with each other. You could do that with a family and a peace pole in their backyard, or with anyone else with a peace pole in a public place. If it can be established as a place that is different, as a place where we drop other problems and considerations in order to work on this one, that is one way that peace poles can be a benefit.

5. Describe the most unique, or challenging, peace pole you’ve made so far.

I made an invisible peace pole. There is a thing called hypersonic sound. It is like a laser beam in how tightly defined it is. If you pointed it across a parking lot, someone who walked into the beam of sound could be hearing deafening thunder while someone ten feet away heard nothing. I put recordings dozens of native speakers of different languages saying “May peace prevail on earth” and put them on a loop broadcasting in a vertical column of sound. It’s on the coast in Texas, I think on private property, where people walk through it on their way to the beach. So it is an invisible peace pole of sound.

6. During the dark times, is making art an outlet? A needed distraction? Or something else entirely?

Something else entirely. For me making art usually is the only thing between me and darkness. If I cannot be creative I get seriously depressed. It is a bulwark more than an outlet. However, what is the point of making it if no one sees it. It must have an audience in the end. Otherwise it is like cooking food that no one eats. Still, that is not what staves off darkness for me. What does is where I go mentally during the act of creating. There are plenty of outlets for expressions these days. Having people eat what I create for me wouldn’t stave off darkness if I was putting hotdogs in buns all day for the audience. But if I spent three weeks or months or however long it took, to figure out something new that was transformative, it is during that period of time that I would have staved off the darkness. Someone finally eating it is what would keep me from feeling that I had been fooling myself the whole time. And, interestingly, for me, I need only one person to eat that creation in order for that to work for me. After that I lose interest and need to move on to the next creation. Which explains why the best two peace poles I have made are taking so long to find their way on to my website. I have seen people engage with them in a gallery. I’m done. I’m ready to move on to trying to make one that’s even better, if I can, but I need to pay for what it cost to develop these last two. So I have to sell some first.

7. You organize a regularly gathering group of creatives (of many disciplines) in Cincinnati. Why is that important, and what does it do for you?

Sometimes someone in the group will complain about a problem with a material or a technique and someone else will tell how he/she solved that. Sometimes the discussion is about aesthetics. Sometimes it is about opportunities. Today after the meeting ended three of us continued to talk for a while and in the end opened an app that I’d put on my cellphone a couple of weeks earlier. I had found trying to employ that app boring and even distasteful until three of us took it on. Then we were laughing and playing while we figured it out. Einstein was his most productive when he had people with whom to discuss his thoughts. At times we all are. But you’ve got to be talking to people who know what you are talking about. We get that in this group. 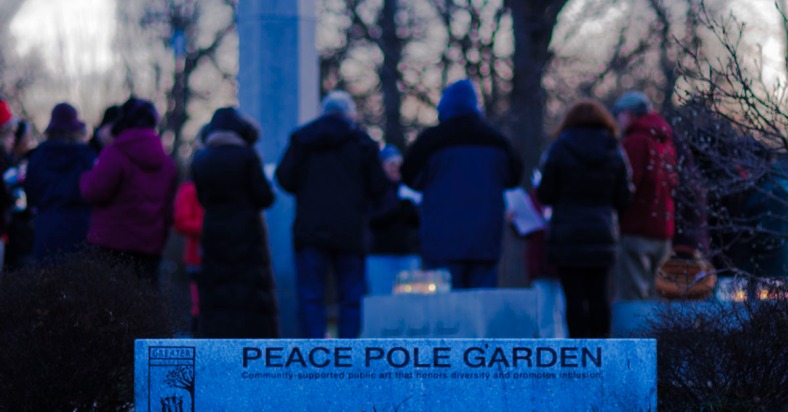 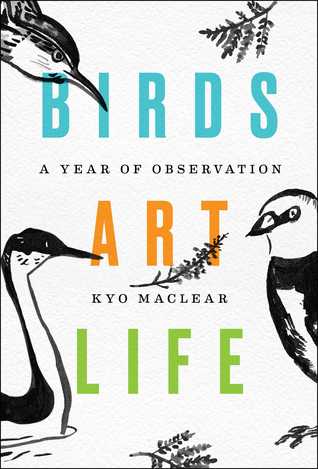 Birds bridge the ordinary and the unknown as few other creatures can. In Birds Art Life: A Year of Observation, novelist, essayist, and children’s author Kyo Maclear details a year of urban birdwatching and life shifting in her home city of Toronto.

While coping with her father’s illness, the married mother of two young sons happened upon the photography of a musician and urban birdwatcher, and was riveted. “These birds lived in gardens of steel, glass, concrete, and electricity,” she said, but the message in the photos was not one of environmental sins, but of love for “the dirty, plain, beautiful, funny places many of us call home.”

The musician (as he is known throughout the book) became Maclear’s guide on a number of bird walks throughout the year. As so often happens when we take up something new, ostensibly to distract ourselves, the insights that emerge bring us right back to face the music, if we are willing.

Accompanying the musician to his father’s aviary of finches, for example, and feeling like a “galumphing invader” among the tiny, captive creatures, sparks reflection on the quality we most associate with birds: freedom. We are all captive in some way to something, Maclear said — such as the cages of ego and habit we may or may not recognize. A small birdwatching excursion to a marina on the edge of the city not only teaches her how to distinguish among trumpeter, mute, and tundra swans but becomes an almost meditative experience of simultaneous waiting and experiencing.

As she began to talk about the subject of this book, Maclear was surprised by the number and diversity of people who shared their own bird stories and passions — rich hobbyists, former POWs, people who traded the bottle for binoculars. “They had lost something, hoped for transcendence, wondered how best to live this life. Birds spoke to their irrevocably blue parts, their hopeful parts.”

The birders she encountered in books and in the world shared little except this, she concluded: “If you listen to birds, every day will have a song in it.”