If you are in transition, chances are an animal is or is waiting to be your teacher. Cats in particular choose us for these missions, although some cleverly let us think we do the choosing.

For example: A tiny, loudmouthed tiger kitten adopted me at a Southern Indiana animal shelter when I was just out of graduate school and unsure of the next step. When I picked her up, she looked me straight in the eye and meowed. I’d passed muster. 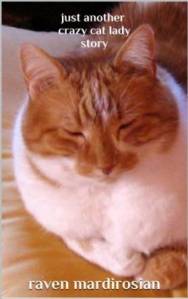 Raven Mardirosian describes a similar experience in “Just Another Crazy Cat Lady Story” (2014). She had just arrived in Fort Collins, Colorado for graduate school. On the East Coast, she’d left behind her fundamentalist Christian family and her “sort-of” girlfriend at their Christian college, which banished Mardirosian from campus when their relationship was uncovered (by said girlfriend).

It was the beginning of many years of wandering — if not running — and yet there she was in an animal shelter, about to take on the commitment of adopting one of two kittens. She was drawn to the darker one, as the orange tabby reminded her a little too much of the beloved family cat whose loss she still grieved. But when the orange tabby’s tiny white paw grabbed her finger, Mardirosian knew she’d been chosen.

That orange tabby, Avery, became Mardirosian’s link to a kinder, gentler way of being amid a return to the East Coast and a series of jobs, schools, apartments and girlfriends. People in her life asked: When are you going to grow up? When are you going to get right with the Lord? Avery just napped in her lap, knowing she would figure it all out.

Zoey turns her eyes my way: jade green, with just enough of a razor slit to show that I’m not the only bitch in the room. …

Then she decides to come over and say hello.

The magical three words. All of the chasing after my parents’ love, the attention of the beautiful redhead or blonde or black-haired girl at Henrietta’s … flies back in one terrifying sword of truth — she likes you — as Zoey remains in my lap, not quite seated, not quite standing.

She does, doesn’t she?

Still, in the beginning there was fearsome hissing and screaming, broken glass and an abscessed injury to the base of Avery’s tail. Though Zoey did settle down, she remained moody and opinionated — much like Idgie, my aforementioned loudmouthed tiger cat.

Mardirosian developed a unique relationship with each of her feline charges: “I’m much more aligned to Zoey, the secret observer. The runner. I’ve got that skill down pat. Avery challenges me to remove the labyrinth that winds its way around my heart and let others love me.”

Her account of Avery’s illness and the agonizing decision to let him go, after nearly two decades of life and love, is wrenching. Though deeply moving in and of itself, it brought back the loss of Idgie, who passed at age 16, quite vividly.

Even in her grief, Mardirosian recognizes, as I did, that her friend and guide is “safe, happy and free. … This crazy cat of mine will fly on. I may not know how — but trust the energy that propels him forward will move me in the same way.”

At our city shelter, I met a tortoiseshell kitten. I picked her up, and she reached out and patted my face with her paw. Lucy is now an easygoing 3-year-old, a very different cat with a new set of lessons.

Sign up for my monthly newsletter, Animal Wise, here. Your address will not be shared.